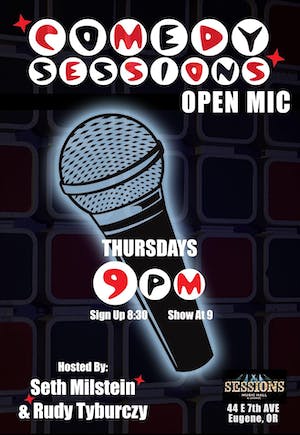 The Speakeasy Conservatory is located on the East end of Sessions Music Hall. Entrance is in the alley that faces the Park Blocks and is indicated by a Red light on a Red door.

ROB JENKINS uses his unique point of view, quick wit, and disarming delivery to tell you why he's right. You'll disagree, but you'll laugh anyway. A Detroit native, Rob has performed at many festivals including the Oddball Comedy & Curiousity Festival, Bridgetown Comedy Festival, and Laughfest where he was a participant in the Best of the Midwest Comedy Competition. Rob has appeared on the Fox Stand-Up Comedy Show “Laughs” and appeared in Dave Landau’s Detroit-based comedy “The King.” Rob has opened for Kathleen Madigan, Hannibal Buress, Kyle Kinane, and many others. In 2019, Rob released his second comedy album "Attempted Salvation" - it's available on iTunes, Amazon, Google Play, and many other places.

PAT SIEVERT is a comedian, podcaster and all around whimsical rustler from Lansing, Michigan. He has performed in comedy clubs and other venues throughout Michigan and the Midwest. Pat’s unique humor is unexpected yet relatable, and will make you laugh and think. Pat has opened for Nikki Glaser, John Heffron, Stewart Huff, and Keith Alberstadt. In 2016 he performed at Gilda’s Laughfest in Grand Rapids, Michigan, Whiskey Bear Comedy Festival in Columbus, Ohio, and The Savage Henry Comedy Festival in Arcata, California. Check out Pat Sievert’s Presidential Fitness Test podcast (coming later in 2017), and catch Pat live on stage!