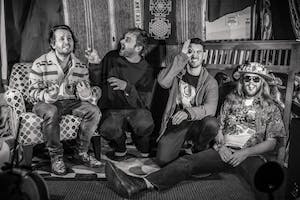 iCal
Google
Animalingo is releasing their highly anticipated album and are looking to party with long time supporters The Macks and Spiller.

Animalingo is a band with classic beginnings. We all know the story—four friends coming together to make music in a garage, share some passionate jams, create some songs, and formulate into a band. Three years later, Animalingo has defined themselves as a versatile psychedelic rock group sure to captivate listeners with their unique and far-reaching musical palette.

The group is fronted by Zev Kamrat and Alex Weston, sharing duties on guitar and vocals. Splitting the frontman role in two has proven to be fruitful for the band in terms of creating various sounds and engaging with different songwriting styles. Behind them are Sean Bethem and Nathan Chesnut who form the rhythmic backbone of Animalingo and keep the party moving. The diverse musical backgrounds of each member provide an eclectic sound that ranges from indie to funk to bluegrass, while maintaining a strong undercurrent of psychedelic rock throughout.

Animalingo's goal is to get listeners moving and grooving to their one-of-a-kind sound. Their live shows are sure to be a memorable experience for any audience who soars through the musical peaks and valleys with them. Propelled by jammy guitar licks, crisp vocal harmonies, and a thumping rhythm section, audiences will be invigorated by the end of the set and eager for more.

The future is bright for Animalingo who will be releasing their debut album in early 2020. They plan on supporting the album release with live performances, festival appearances, and regional touring.